Toei Animation Studio has just announced that it is suspending production of the One Piece anime without a date for a reunion.

Today (April 20), Toei Animation said that they have decided to stop producing two anime series, One Piece and Digimon Adventure, for a while due to the complicated situation of the COVID-19 pandemic in Japan. This is the first time the One Piece anime has been postponed indefinitely after 20 years.

The studio’s announcement said, “Due to the state of emergency in Japan due to the COVID-19 pandemic, we have carefully considered the safety measures to prevent the spread and decided to stop the production and development of the film. One Piece and our new series Digimon Adventure for a while. We will update the return date of these 2 series as soon as we have information. Thank you for your patience and understanding. you during this time. Please stay healthy.” 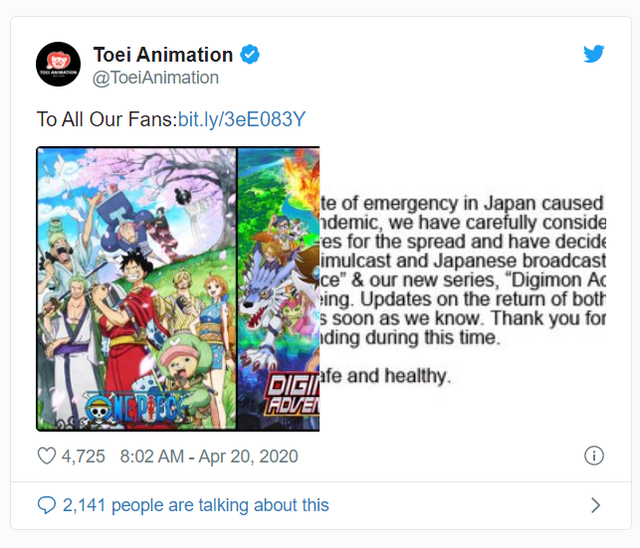 Toei Animation is also the first animation studio to announce the suspension of production because of the COVID-19 epidemic. After the company’s announcement, most fans expressed their sadness but also thought that the decision was understandable to protect the safety of Toei Animation’s employees.

Earlier, actress Mayumi Tanaka – who voiced the character Luffy – also recently announced on social networks that she will take a break from voicing her familiar anime character.

Currently, the One Piece anime has aired to episode 929 with interesting developments in Wano Country.

This week, fans of the “Straw Hats” pirate crew were also unable to enjoy the latest chapter of the One Piece manga in Weekly Shonen Jump as announced by Shueisha Publishing last week due to one of their employees testing positive for the virus. New strain of Corona. The new launch time of the 21st issue of Weekly Shonen Jump is expected to be April 27, 2020, the same time as the 22nd issue.

Besides One Piece, Weekly Shonen Jump is currently publishing a number of other popular manga series such as My Hero Academia, Kimetsu no Yaiba, Hunter x Hunter, Black Clover, Haikyu!!!, Dr. Stone…

Japan, after a period of good control of the epidemic, is now at risk of a health system crisis because the number of new cases has increased rapidly again with a total of more than 10,000 infections. Japan is also concerned that its health system will find it difficult to cope with a large wave of COVID-19 patients. If you can’t wait for the movie, you can buy for yourself an One Piece Merch.